Fluffy is an exceed and has an appearance very close to that of a cat. Although Fluffy can also change his form using illusions. He can look like a young male child or an older female adult

Fluffy is kind of robotic and looks at things objectively without showing too much emotion. Although when he takes on different forms he will often act in a way that best fits that "character". He has 7 split personalities that each have their own diguised form.

Luke: Luke is very passive in nature. He tries to avoid pople when he can prefering not to lak or interact. He is fairly lazy and often even when out to do something he acts as though he doesn't want to be doing it.

Sarah: Sarah is quite innocent and kind. She is cheerful and enjoys being out and about. She enjoys learning new things and becoming better at what she does know.

Steve: Steve is a little violent and agressive. He often seems to have a sense of urgency and often have people getting on his nerves for some of the smallest things. He is a bit of a womaniser although doesn't like to be pointed out as such.

Juliet: Juliet likes to try and look good. She takes care of herself and often uses her own "assets" to get what she wants. She can be fairly nice but doesn't take kindly to insults.

David: David is quite nice to most people he meets. He tries to make friends with almost everyone and avoids conflict unless nessesary. He savors his friends and will stand by them when he needs to.

Stacy: Stacy often feels she drew the short stick in life. She was born among 4 other children who all seemed to be better than her at most the tings she had tried in her life. She doesn't try things for long, and often expects to be good at something after trying it for a day at most. she comes across as a bitch and doesn't mind it being that way.

George: George is a kindred heart, he isn't much for fighting and is known as a bit to a cry baby. He has a very high metabolism and eats quite a lot without gaining a lot of weight. He doesn't like fighting so often doesn't like any forms of conflict but doesn't like to step into situations of conflict where he can avoid it.

-Being treated as a pet

Fluffy grew up in the streets. It isn't like Fluffy remembers a lot of his first years of life but he did hatch out of an egg like any other form of exceed. He lived mostly like a cat for the first part of his life learning of visuals of cats naturally on the streets. He was more suited in this society as a cat than as an exceed. Over the course of a year he listened to human speech and slowly learnt to speak as well as reading several books to improve his knowledge. It isn't really what he remembered but he did eventually develop to a point where he could propperly speak while also learning of his species being that of a mythical creature called an exceed.

It was quite a poor lifestype for fluffy, mostly living as a stray cat of sorts. Waiting at the back of resturants for the nights food to come out while also being attacked by other cats for the scrapes. Fluffy wished that he wasn't an exceed and wasn't mistaken as a cat. He wanted to intergrate into society more and more, and in turn watched humans from the sidelines more and more. Eventually Fluffy began to immitate humans, He would walk as he naturally would on two legs and act how certain humans would act without conciously meaning to. He began to form other personalities in his mind which eventually grew to multiple different people. It was seen as weird when he interacted with humans as an exceed but was once seen by a travelling mage.

The mage took him in, the exceed intrigued him and he had also read about them at some point. He wanted to document fluffy as he was and decided to teach the exceed his own magic to see if the rumors about exceeds being magic users were true. The man seemed to constantly be on the move from varying forces across fiore, probably being a wanted mage but it seemed like fluffy had some form of home. Although one day the man had lost interest in the exceed. He had taught it magic and it was interesting, but for him the information he had gathered was plentiful. He eventually kicked Fluffy out seeing him more as a hindrance than an asset to him and then moved on like he often did. The only thing fluffy had really gained was a higher understanding of despicable humans and the magic this cured mage had taught him.

Using the magic he had obtained allowed Fluffy to blend in with society a bit more but after losing his home once again his other personalitie only became more prevalent. It felt wrong that he would keep changing all the time between different personalities and decided to seek help. Now he had illusion magic he could disguise himself as a human to seek human advice. Although it took some time he was diagnosed with a form of multi personality disorder and was given some odd pills that would help him control the varying personalities he had. Although even with this medication fluffy had still made faces for these personalities and the only thing the pills did was give fluffy more control.

Fluffy decided that in life he would observe humans as his master did to him, and eventually find some way to get revenge for the life he had to live. He didn't have much of a reason but this injustice just felt wrong to fluffy and he wante to do something even if that something wasn't clear. He eventually decided to leave the small town he was in to go to magnolia town, which in turn could hopefully help him become a stronger mage, and maybe fix the injustices that were done to him.

Fluffy can disguise himself to look like other people or objects. This will persist until he can no longer hold it due to taking major damage or  from being spooked out of his disguise. If Fluffy runs out of mana while in disguise it will also break.

Fluffy can disguise another person for 5 turns by touching them. This causes them to appear as another person or thing for the 5 turns it is active then will wear out. If the target is made to look like an object movement will cause the illusion to shimmer.

Fluffy can disguise up to 5 people in 10 metres of him for 3 turns. If fluffy himself is attacked everyone's illusion will be broken.

Fluffy can create a focussed illusion that wont break from him being shocked or attacked. This illusion is much harder to keep active and as such can only be applied for 4 turns

Fluffy can create Illusions of around 30 people. These can walk around up to 100 meters away from fluffy and will persist for 5 turns. These illusions will disappear upon being touched, and due to the focus required to create this illusion any movement from fluffy will cause the illusions to shimmer causing them to look like they are appearing and disappearing.

Fluffy can copy the look of other magic he see’s, This will only appear as an attack but will deal no physical damage if it manages to hit someone.

Fluffy can create an illusion of any hand held weapon for 5 turns. This weapon is purely an illusion and alone does not deal damage and cannot intercept other blades.

Fluffy can cause his phantom blade to cause illusionary cuts whenever the blade makes contact. These cuts will appear to bleed depending on the depth of the strike, but no pain will be felt nor will any real blood loss actually occur.

Upon touching a target with his phantom blade fluffy can cause an illusion on the person by sending the feeling of pain to the brain. This will cause the person to feel extreme levels of pain that would occur from the wound made plus an intense pain as though acid made it into the wound.

Fluffy can create an illusionary clone for 2 turns that can wander 5 metres away from fluffy. This illusion will appear as a human but cannot be harmed or touched. Any contact made with this clone will pass through it. While the Illusion is summoned fluffy cannot move.

Fluffy can create up to 2 illusionary clones for 2 turns that can wander 10 metres away from fluffy. This illusion will appear as a human but cannot be harmed or touched. Any contact made with this clone will pass through it. While the illusions are summoned fluffy is unable to move.

A brief description of your OC so those who interact can get a good idea. 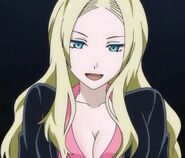 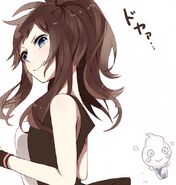 Out of Character Info[]

Community content is available under CC-BY-SA unless otherwise noted.
Advertisement